In a world united against man-made climate change, carbon emissions matter. In 2021, 18% of North American businesses report carbon emissions associated with their products and the B2B focus on the ‘greening’ of supply chains is accelerating. In fact, corporations are serious about their commitment to action, as evidenced by the 300 signatories behind an open letter calling on the US to do more to reduce greenhouse gas emissions. When deciding how to reduce the carbon emissions of your business, how can you make the greatest impact?

The path to a zero-carbon world will require both renewable energy and energy efficiency. The International Renewable Energy Agency (IRENA) estimates that renewable energy paired with increased electrification could achieve 75% of the emissions reductions that scientists say are required to limit global warming below 2 degrees Celsius (3.6 degrees Fahrenheit). Add efficiency upgrades to that same electrified world, and the two together could provide over 90% of the carbon emissions needed in the next few decades. Although this comparison is on a macro scale, it says a lot about the power of renewable energy to make an immediate impact on carbon emissions.

Digging deeper: the role of clean energy in our low-carbon future

Global data shows that the best opportunity to reduce carbon emissions comes from the decarbonization of power grids, coupled with electrification. Our partners at the National Renewable Energy Laboratory (NREL) have studied electrification and what it means for infrastructure, business and carbon emissions. They found that the widespread electrification of the transportation, industrial and residential sectors would require doubling the power provided by the grid. Of course, there’s an important way around that: distributed power. When power is used right where it’s produced, there’s less demand on the grid, less emissions and huge savings for the customer.

But what about the solar panel production process? It’s true that there are some negative impacts from the mining of rare minerals and industrial processes, but intensive research by an international team of scientists found that the lifetime greenhouse gas emissions of solar panels is 10 to 53 times lower than that of coal, natural gas or oil.

The lifetime greenhouse gas emissions of solar panels is 10 to 53 times lower than that of coal, natural gas or oil.

One commercial building can make a big difference

What if switching to zero-carbon energy meant your business would lower carbon emissions equivalent to the monthly work of 1,309 mature trees? For the average commercial building, that’s the power of renewable energy. Let’s consider an example of a commercial building switching from the grid to solar power. In the US, the average commercial utility bill is $602.92 for 5,692 kWh of electricity. There are regional variations in emissions from the grid as a result of where renewable and fossil fuel power plants are distributed, but the overall average carbon emissions in the US is 0.92 pounds of carbon dioxide per kWh of electricity. Plug in the numbers from our example, and the average commercial building is responsible for 5,236 pounds of carbon emissions each month. For reference, a typical mature tree can absorb about 48 pounds of carbon dioxide annually. Clearly, renewable energy is the most profound opportunity to reduce greenhouse gas emissions in the short-term, and businesses can lead the way.

The average commercial building is responsible for 5,236 pounds of carbon emissions each month.

A 2019 report by American Council for an Energy-Efficient Economy (ACEEE) found that if pursued aggressively, energy efficiency upgrades could cut energy use and carbon emissions in half by 2050. This estimation is a best-case scenario that includes all sectors of the economy renovating buildings to greatly reduce heating and cooling needs. How does this translate to individual businesses? The US Department of Energy’s ENERGY STAR program say’s that certified commercial buildings use 35% less energy on average. If we refer back to our example scenario, the average commercial building in the US would reduce their carbon emissions by 1,832 pounds each month. That’s a huge and valuable reduction, but that same building would still be responsible for over 3,400 pounds of carbon dioxide emissions each month with today’s electrical supply. Energy efficiency improvements have the ability to slash energy needs and consequently greenhouse gas emissions, but the data show that transitioning to clean energy goes even further.

The health benefits of renewable energy

Carbon dioxide is one of many pollutants released by the burning of fossil fuels. Renewables slash the emissions of other pollutants that are proven to be harmful to human health. While energy efficiency reduces the load on the electric grid and lowers bills, switching to a clean energy source like rooftop solar eliminates pollutants entirely. Nitrogen dioxide, sulfur dioxide, carbon monoxide and ozone are all released by fossil fuel combustion. Eliminating the use of fossil fuels is the only sure way forward to a cleaner, healthier world.

Renewable solar is the best path to low carbon

Energy efficiency and renewable energy work in unison to reduce our reliance on carbon-intensive fossil fuels. At Lumen Energy, we’re believers in the power of data. In-depth comparisons looking at the facts show that switching to renewable energy is the most direct path to reducing and even eliminating the carbon emissions from your business. We use the latest science to deploy reliable, efficient solar energy systems that are custom-tailored to your facility’s needs.

Speak to an energy expert

Previous
Next
ESG is now good business
Complete guide to understanding ESG: criteria and objective
3 options for financing energy projects
Net zero and its impact on institutional investors
Vicolo Wholesale goes solar with Lumen Energy
The power of data: the value of connecting
Clean energy mandates bring solar to the forefront
How going solar raises commercial property value
Reduce your carbon emissions: renewable energy vs. energy efficiency upgrades
ACT Bid Scoring: Process & Guidelines
Financial metrics glossary
What is your method for placing solar panels?
How does Lumen determine the optimal amount of solar for a building?
When will we receive projects from Lumen?
What does this cost us?
How does the bid process work?
Who carries liability on the installed system?
How much overlap is there between us and Lumen?
Is Lumen a solar developer?
Can we have exclusivity? 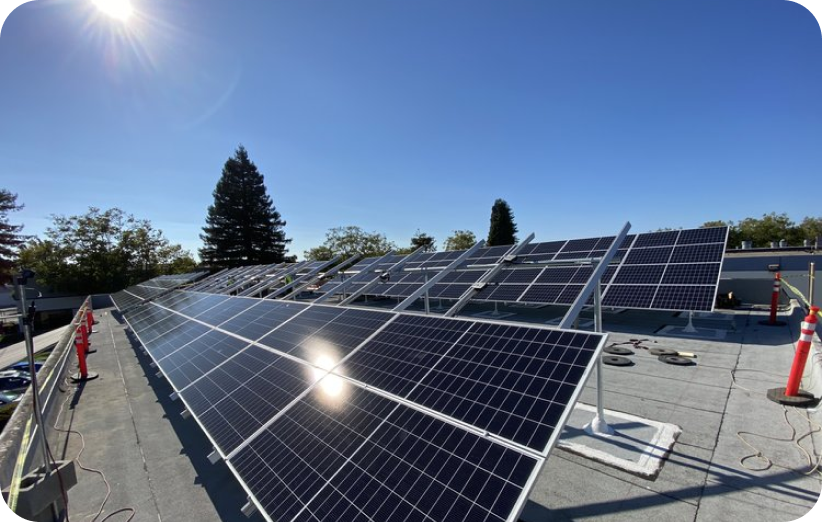 Vicolo Pizza got its start like many great businesses do, by providing a unique product that customers crave. In 1997, CEO Eric Mount and his team of pizza lovers began selling their signature Corn Meal Crust Pizza to gourmet supermarkets in the Bay Area. Today, their products are sold across the nation. As proponents of natural and organic ingredients, sustainability comes naturally for Vicolo Pizza. Eric was already familiar with solar energy after installing a system on his home. But as the leadership team began exploring their shared desire to generate clean, reliable energy, commercial solar was proving more challenging to navigate than a simple residential installation. 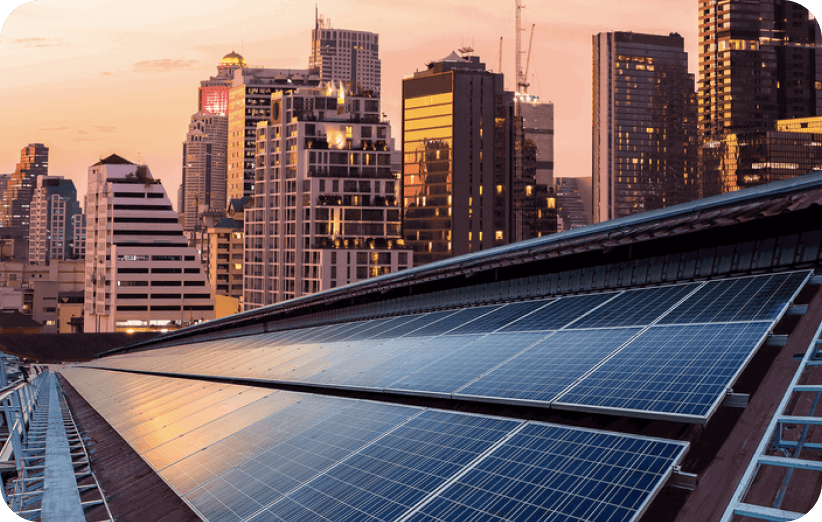 By now, it's become common knowledge that big corporations like the cost savings of solar power. While Apple, Target, and Walmart are frequently cited examples of clean energy adoption, most non-residential solar energy is being generated by municipal utilities and small to mid-sized enterprises. 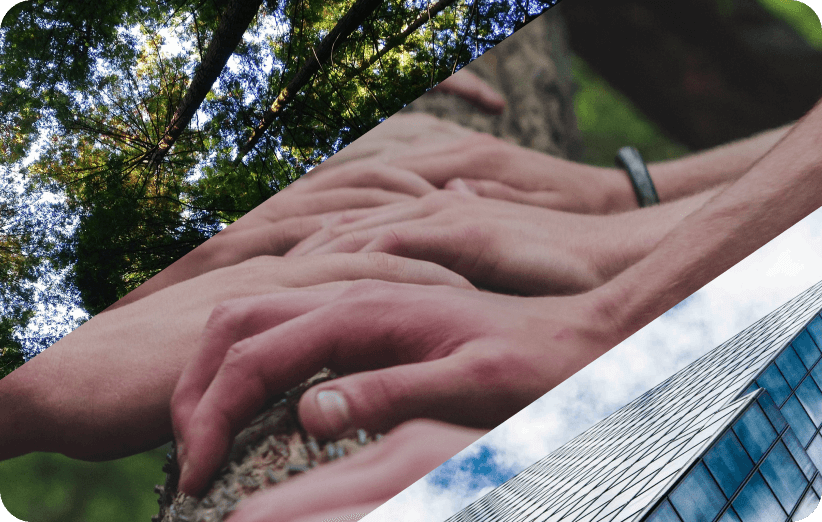 Environmental, Social, Governance, or ESG, is a measurement and reporting standard commonly used by investors to evaluate how responsibly a company earns its profits. The criteria were first introduced in a 2005 study examining the relevance of environmental, social, and governance factors to asset management and financial performance.